FelSword is a progressive PvPvE World of Warcraft: Burning Crusade private server with max Level of 255, Custom Leveling Zones, Instances, Dungeons, Items, Bosses, Quests and many more is awaiting to be explored by YOU!
Play NOW: Set realmlist play.felsword.com

Join our Discord Server and you may have the chance to win exclusive prizes!
>>> JOIN OUR DISCORD NOW <<< 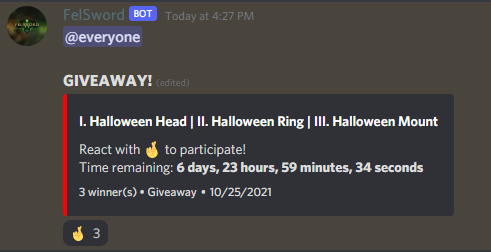 The Hallow's End has begun!

The Hallow's End has begun! Enjoy new limited prizes available until the end of the event! The event will run until November 1, 2021

World Boss: Igor - The Fallen One

We restored all the VP and DP from our previous website.
Soon we will add items to the store and the voting panel!

From now until 18 July you'll get double XP bonus!

Before leveling up, don't miss to participate in our Giveaways!
Join our Discord Server NOW!

How to participate?
Join our discord server and react in our "giveaways" channel.

You'll have the chance to win a Swift Spectral Tiger by joining our discord server and reacting on our "giveaways" channel! 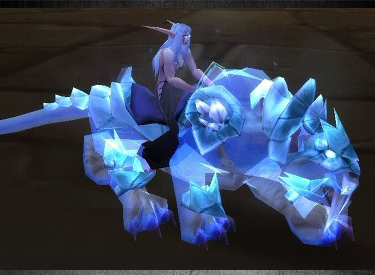 The server team and I decided that Azeroth would become an independent project that would not be connected in any way to the currently available realms.

In the last few weeks, our team has been working hard on the first core of Azeroth, which is a combination of three separate cores (MaNGOS, Oregon and TrinityOne) - combining them together we managed to achieve our own core - AzerothCore, which was later renamed to our upcoming project - FelSwordCore.

FelSwordCore is a unique core because it offers a flexible structure, easily accepts custom changes and scripts, stable at high performance as well as smooth gameplay.

But that's not all! Our team cares a lot about the security of our services, which is why FelSword has two Dedicated Virtual Machines:

PS: The server is still underdevelopment! During the release, the server will be synchronized with the last days of Azeroth, which means that you will lose the whole process in the current beta! This is a mandatory process, as it is possible during the beta to have problems such as - vendors without extended cost a.k.a free items, overpowered/bugged/stucked classes/characters and so on. Please keep that in mind!